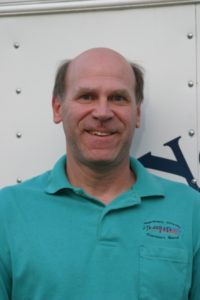 How long have you been playing and when did you start? (School, age, etc.)
I started playing trombone in the 5th grade on a clunky old instrument. After 1 year of struggling with a slide that stuck and the two pieces that fell apart, I begged my parents to let me quit. Only on the condition that I played another instrument was this possible. So I played cello from 6th to 12th grade (plus one very embarrassing semester in college).

Have you played continuously, or did your instrument gather dust in the closet for several years? What brought you back?
I hadn’t played the trombone for 40 years. A few years ago my neighbor Herman Swanson, a member of the band, started bugging me about coming to play. Before I relented, he already had my 8th grade daughter, Angela, playing alto sax in the band. It just looked like fun. So I got brave, fixed up a new old trombone and started playing. Now, both of my daughters, Angela and Tracy (oboe), play in Northern Winds also.

What do you like about playing in Northern Winds?
The band members are absolutely wonderful. The audiences just love the performances. The trombone section is a bunch of wise guys just like me. The music selections are varied and interesting. Every once in awhile Joe, the conductor, finds pieces that really let the trombones rip!

Anything else you would like to include: Current employment, school, (music degree), retirement, family—whatever you would like known about you!!
My lovely wife, Judy, and I came to Richfield in 1992. We have 2 older children–Emily, 26, who works with Campus Crusade in Salt Lake City, and TJ, 24, who is in graduate school in Madison, WI. Angela, 15, and Tracy, 13, both play in the band at the Richfield schools. The girls and I really must be impressing my wife because she just started taking harmonica lessons!