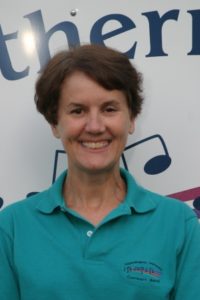 What other groups (if any) have you played in over the years or are you currently playing in? Please include military.
I started flute a few years back in fifth grade and picked up the piccolo during junior year of high school.

Have you played continuously, or did your instrument gather dust in the closet for several years? What brought you back?
I played with the Symphony Band (second string band) at the University of Iowa for two years and played in the Marching Band all four years. The year I joined the Marching Band was the second year they allowed women in the band. Had we come a long way, Baby? I continue to return every Homecoming to Iowa City to play in the Alumni Band (Fossil Band) in the Friday night parade and the pre-game show for the football game. We have yet to misspell “Iowa” and Hawks” when we form the words, but then, Iowa is known for its excellent school system. I played in the Honeywell Band for a few years after moving to Minneapolis from Iowa.

What do you like about playing in Northern Winds?
I put down the flute for about ten years while raising children, joined Northern Winds shortly before Al Sweet retired as director, and rejoined the Honeywell Band in the fall of 2008.

Anything else you would like to include: Current employment, school, (music degree), retirement, family—whatever you would like known about you!!
I have found all the band members to be kind and caring and fun to be around, just a nice bunch of fellow bandians. I also like the variety of music we play, even though I still think we should always end with a march.